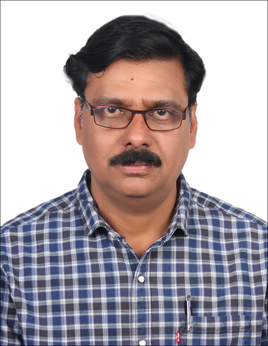 Dr H.V.S. Satyanarayana received B.Tech and M.Tech Degrees from Nagarjuna University and JNTU, Hyderabad respectively and Ph.D from IIT Bombay. Dr Satyanarayana is currently Chief Scientist and Head of the department, Instrumentation at CSIR-NGRI, Hyderabad and engaged in the development of Geophysical instruments.

Dr Satyanarayana has contributed significantly in the field of seismology by designing and deploying several seismological networks for earthquake studies, hazard assessment in critical geologic segments of India. One of the important contributions is the establishment of the borehole seismic network at Koyna Warna area of Maharashtra state up to depths of 1500m.

By way of design and development activities, played a pivotal role in the area of geophysical instrumentation at CSIR-NGRI and established the test and calibration centre for seismic instruments that were put to good use in space probe related pay-loads and Nuclear power plants.

Headed the Engineering Geophysics group of CSIR-NGRI and conducted several geo-technical investigations at Nuclear power plants sites, large dams and coal mining areas. In the projects granted by Ministry of Coal, carried out extensive 2D and 3D seismic studies for identification of new coal seams and shales and CBM etc and towards their evaluation as a resource potential.

As Head of the Instrumentation group at CSIR-NGRI, mentoring the colleagues on geophysical instrument development is an important responsibility. Idea generation, troubleshooting and testing of geophysical instruments are some important tasks in this regard. In this direction a state-of-art Test and Measurement lab was developed and is inaugurated recently. Also, acted as a mentor in the development of a Borehole water quality meter at CSIR-NGRI with the available probes of level, pH, conductivity and temperature.

Aside the scientific assignments carried out, Dr Satyanarayana always shouldered additional responsibilities, both situation specific and otherwise, whenever the Institute needed his services. One such good example was as Head Electrical Engineering section for five years (2013-2018) as additional-charge.

The prompt conduct and wilful participation both as a P.I and/or Party Chief in aftershock surveys/studies in highly vulnerable regions visited by large earthquake such as Chamoli, Uttarakhand and Bhuj , Gujarat and other parts of India in the immediate aftermath of devastation testify Dr. Satyanarayana’s courage and sense of responsibility.