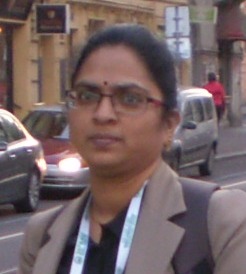 Dr. N.Satyavani completed M.Sc (Tech) in Exploration Geophysics from Andhra University in 1998 and thereafter joined NGRI as a project fellow in the CSS group of NGRI. She was awarded Ph.D in 2002 for the novel approach developed by her to delineate the seismic velocities from the CDP reflection data in presence of dipping strata in the Aravalli Fold Belt region. This was the first time that the velocity-depth configuration was published along this tectonic province. Thereafter she joined Gas Hydrate Group and is actively engaged in the niche areas of Seismic data processing, Seismic attribute analysis, travel-time tomography, Pre-stack depth migration and seismic interpretation. She has carried out anisotropy studies using phenomenon of S-wave splitting in the multi-component OBS data. She has participated in the data acquisition for gas hydrates carried out by NGRI in the Eastern Margin of India. She is member of Geological Society of India, European Association of Geoscientists and Engineers (EAGE) and Society of Exploration Geophysics (SEG). She has 16 publications in CSS and Gas hydrate studies.